RTI Pilot will assist the MoFALD to develop an “Improved Maintenance Culture” for rural roads, by supporting various initiatives at the central and local levels

Lack of awareness of maintenance issues

Lack of funding allocation for maintenance

Appropriate technology and equipment not always specified or available

Discussions with various organisations involved in the maintenance of rural roads, has led to the adoption of the following approach to the support provided for rural road maintenance initiatives.

Build on existing capacity where possible

Utilisation of most suitable technologies

In February 2008, the Government of Nepal (GON) signed a Statement of Intent (SOI) with seven development partners to work towards a Sector Wide Approach (SWAp) for the development and management of the Rural Transport Infrastructure (RTI) sub sector. The intention is to introduce a new model of development cooperation to promote greater harmonisation of donor and government activities in the sub sector. This will be achieved by GON and its development partners adopting a single, Government-led, RTI policy and common approaches to RTI development. This is to be matched by improving governance and capacity building at local and central levels of government to allow progressively greater reliance to be placed on government procedures for implementing future RTI investments. Based on the RTI SWAp Framework for Action prepared for DOLIDAR in 2009, this initiative is to be piloted in two phases in seven selected districts as shown in the map below, before being rolled out to the rest of the country . Phase 1 will seek to establish a road maintenance capacity to protect existing and future RTI investments. A Technical Assistance Programme was set up in late 2010 through the Rural Access Programme to prepare and carry out an Implementation Plan.

Political instability, corruption and poor governance are significant challenges to the introduction of a Sector Wide initiative to RTI. However, road access is vital to the continued fight against poverty and supporting economic growth in rural areas.

“Keeping roads open” is an early objective of the Pilot.

Other objectives of the Pilot include preparing the way for eventual roll out of the RTI Maintenance Pilot nation wide.

Partnership Agreements for TA support to achieve CIP objectives will be renegotiated annually with the GON central and local agencies to reflect progress.

Progress against Continual Improvement Plans will be linked to performance based incentives to reward achievement.

Originally intended to validate and refine the Framework Approach, it is now clear that the Maintenance Pilot faces fundamental capacity and transparency issues at the district level. The initial focus on improving asset management will therefore be at the district level where the lack of capacity is a major obstacle to the efforts of central agencies to implement GON RTI policy.

Asset management – “Keeping roads open” will use an annual, post-monsoon, road inventory and bridge condition survey, supported by a Pilot engineer embedded in the DTO Office. The majority of district roads are fair weather and experience significant damage as a result of monsoon rains. A reactive “repairs” approach is likely to be better received by districts in the current political climate than a preventative approach to maintenance, which would be a medium term objective.

Funding – GON funds under the new SWAp budget head for Pilot Districts are available for an annual district roads “repair” programme designed to maintain existing RTI assets in the early years of the Pilot. These could be topped up by matching donor funds as a performance linked incentive to those Districts able to reach an Intermediate status on their Continual Improvement Plans.

Funding Mechanisms – include the MoFALD SWAp budget head on the one hand to support a reactive repair programme and the RBN pipeline to support the introduction of preventative maintenance systems on the other.

QMS – Maintenance planning, implementation, quality control and reporting have been devolved to Districts over the past two years and are rudimentary at best. Improvement of quality management will require reviews of Manuals, Guidelines and Directives in consultation with DDCs and DTOs, the introduction of appropriate quality management systems, annual audits and an ISO style continual improvement approach to capacity building.

TA Support – Embedded Pilot field engineers will assist in identification of repair and maintenance requirements, the planning and implementation of related works programmes and financial and physical progress reporting acceptable to participating donors but consistent with local district capacity.

Improved Governance will be a major challenge to taking the Pilot approach forward and the pace of change is likely to be slow. However, the Pilot can influence issues such as accountability, overly complex procedures, more objective planning, better informed decision making, progress reporting and financial management systems. Examples include streamlining Pilot DTMP, ARMP and M&E procedures in line with existing district capacity and limited government resources so that they can be replicated nation wide.

Capacity Building using annually negotiated support programmes with key stakeholders will be linked to continual improvement plans for local and central GON agencies participating in the Pilot, backed by both supply and demand driven TA support services linked to a menu of services provided through the Pilot TA and funded through an unallocated, process oriented, Modernisation Fund.

National Leadership and donor harmonisation The GON/donor partnership will be linked to efforts to promote harmonisation between donors, starting with a common approach to maintenance to be piloted in selected RTI districts of existing donor supported projects such DRILP, DRSDP, RAP, RRRSDP and RAIDP. Subsequent phases are shown in Box 4.

Delivering process oriented TA on demand will require flexibility and the ability to respond to requests for support over and above supply led capacity building driven by the Pilot. A core of long term consultants will be supported by a team of short term specialists.

Figure 1 shows the major deliverables of the Implementation Plan including its outcomes, their associated outputs, the range of expertise needed, the composition of the TA team, long and short term inputs, associated responsibilities and the partnering GON institutions involved. This is the Implementation Plan at a glance and on a single page. It is supported by a detailed LogFrame in Appendix 8.1 where outputs are linked to Objectively Verifiable indicators to measure Pilot progress. These will be refined at start up of the TA.

The potential risks to the success of the Pilot are linked to a) the experimental nature of the Pilot b) the fact that improving governance will depend on factors well beyond the control of the project’s management and c) that political instability may prevent or slow down progress. The Pilot is designed to test what will and what will not work, the pace at which it is possible to move towards the sector approach, critical factors for success and how pilot initiatives can be rolled out nation wide. This exploratory and experimental aspect of the Pilot means that, in some cases, year on year LogFrame indicators of progress may not be achieved. For this reason the Pilot adopts a Continual Improvement approach to the achievement of objectives and will develop a Risk Management Plan to define how to mitigate potential risks.

The budget for the RTI Sector Maintenance Pilot consists of a total of GBP 1.35 million for TA over a period of two years to the end of RAP (with the possibility of an extension and increased allocation) and a Modernisation Fund of around GBP 440,000, both amounts to be included in the TA consultant’s contract with DFID. The Fund, which is an unallocated sum, is to support the process nature of the Pilot. Matching or top up funds GBP 500,000 for maintenance works has been made available by DFID to Pilot districts for the year 2011/12. More funds of equal size will be made available from DFID for 2012/13 subject to districts’ progress in achieving results as shown by Continual Improvement assessment. 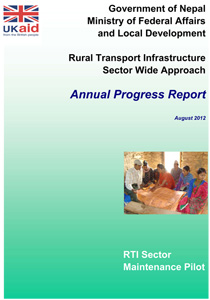